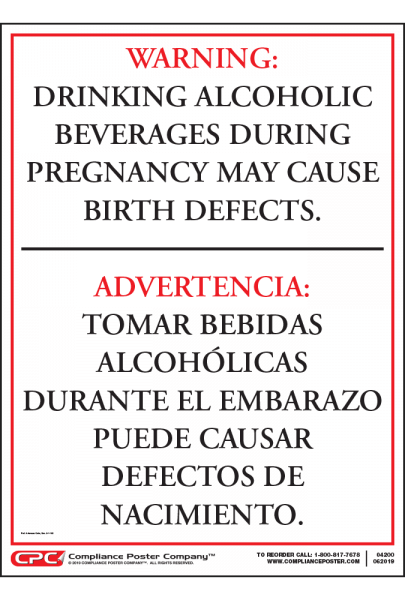 The Arkansas Pregnancy Alcohol Warning Poster must be posted by any establishment which is licensed to sell or dispense alcohol.

Effective July 24, 2019, an establishment which has received a permit from the Arkansas Alcoholic Beverage Control Board to sell or dispense alcoholic beverages is required to post the Arkansas Drinking Alcohol During Pregnancy Warning Sign in a conspicuous place which warns of the dangers of drinking alcoholic beverages during pregnancy. The sign must be printed in English and Spanish. The term “alcoholic beverages” means all beverages containing more than one-half of one percent (0.5%) of alcohol by weight. (Ark. Code § 3-9-105). Covered establishments include:

Why Alcohol is Dangerous During Pregnancy

If a woman is drinking alcohol during pregnancy, it is never too late to stop. For more information visit Arkansas None for Nine.