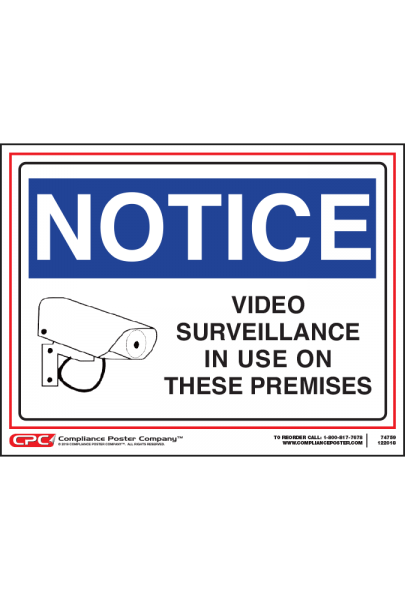 To deter crime and other misconduct, businesses should post a notice to inform employees and the public that the premises are under video surveillance.

Many businesses use video cameras to deter theft or other criminal activity and identify perpetrators when a crime has been committed. Employers use video cameras to prevent internal theft, increase security, deter misconduct and influence productivity.  Typically, video cameras are installed in locations such as tunnels, stairways, elevators, parking garages, building entrances and exits, and outside buildings onlooking streets and sidewalks.  They are used in business offices, warehouses, retail stores, restaurants, hospitals, schools, and sporting facilities. A video surveillance sign or window cling used in conjunction with judiciously placed video cameras can dramatically increase the effectiveness of a business’s well-rounded security program.

Businesses should consider employees’ expectation of privacy in the places they surveil and should always have a legitimate reason for filming. Also, while not required by state law, it is a good practice for businesses to post a notice to inform employees and the general public that the premises are under video surveillance.  Posting signs may reduce or eliminate an individual’s reasonable expectation of privacy in common areas.

Caution:  Audio recording is not the same as video recording.  Most state laws prohibit the use of any device eavesdrop on, record, or capture any conversations or confidential communications without the consent of one or more parties engaged in the conversation or communication.

Even if posting a notice of video surveillance is not specifically mandated by your state’s law, openly posting surveillance signs increases the video camera’s crime deterrent effect.  Individuals are less likely to commit a crime where a surveillance warning sign is displayed knowing that they more likely to be identified and brought to justice.  Employees who are aware they are being captured on video are less likely to engage in theft or other misbehavior and may increase productivity knowing that their performance is being monitored.