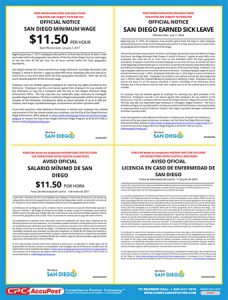 San Diego is included in a growing list of California communities that have raised minimum wage rates above state levels and have tied future minimum wage increases to the CPI. The CPI adjustment model is designed to keep up with increases in the cost of living and maintain the buying power of low wage workers.

This year, San Diego employers need to post an updated for 2017 San Diego Minimum Wage and Paid Sick Leave Poster, but won’t need to update posters again until January 1, 2019. San Diego employers should also be mindful that they are also required to provide to new hires with a statement that describes the employing entity and provides information about the employee’s Earned Sick Leave and Minimum Wage rights. Employers can find an updated free fill-in form here that complies with individual new-hire notice requirements.