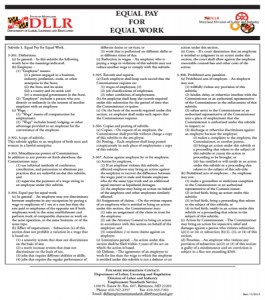 The Maryland Department of Labor Licensing and Regulation (DLLR) has revised the state’s mandatory Equal Pay for Equal Work posting to reflect the current state of the law regarding employer recordkeeping requirements under Maryland’s Equal Pay Act. The Equal Pay Act requires employers to pay equal wages to male and female employees who work in the same establishment and perform work of comparable character, or work on the same operation, in the same business, or of the same type. The Equal Pay Act also requires employers to keep records related to the wages of employees, job classifications of employees, and other conditions of employment.

In 2008, the Maryland Pay Disparity Data Reporting Act was enacted expanding the recordkeeping requirements under the Equal Pay Act. The Pay Disparity Data Reporting Act required employers to also maintain records related to their employee’s racial classification and gender, in addition to their wages and job classifications. The purpose of the pay data reporting amendment was to provide the Commissioner of Labor with data to study issues of pay disparity. However, the Pay Disparity Data Reporting Act was only effective from October 1, 2008 to December 31, 2013. Consequently, the recordkeeping requirements concerning racial classification and gender expired on December 31, 2013. These two recordkeeping categories have finally been removed from the Maryland Equal Pay for Equal Work posting.