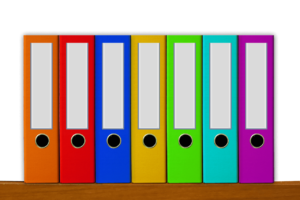 In the wake of weakened federal protections, California has stepped up to increase awareness of the rights which transgender workers already possess under state anti-discrimination laws and address employment barriers.

On October 13, Governor Jerry Brown signed SB 396, the Transgender Work Opportunity Act, into law. The Act, which goes into effect on January 1, 2018, will impose new posting and training requirements on California employers while improving access to state employment programs for transgender and gender non-conforming workers.

Senator Ricardo Lara, who introduced the bill, said the Act was an important first step in improving outcomes not only for workers, but for businesses: “Transgender workers have so much to give our businesses and economy, yet too many struggle with high unemployment because of discrimination and lack of opportunity. Education is the first step towards inclusion, and the Transgender Work Opportunity Act will help California businesses to open their doors to these valuable workers.”

A recent CareerBuilder survey found that 40% of LGBT workers have experienced workplace bullying, a rate 11 percentage points higher than the national average. 41% of those who had been bullied reported that they left their job as a result. These findings are in line with other national surveys: in 2008, the General Social Survey found that 43% of lesbian, gay, and bisexual people had experienced at least one form of employment discrimination due to their sexual orientation, with that rate rising to 56% for those who were out in the workplace. The most frequently-reported form of discrimination was harassment.

Transgender individuals report even higher rates of discrimination and, correspondingly, higher rates of unemployment and under-employment. A 2011 survey by the National Center for Transgender Equality found that transgender and gender non-conforming people were twice as likely to be unemployed as the general population, and four times more likely to be living in severe poverty. 78% of respondents reported experiencing some form of discrimination, harassment, or mistreatment in the workplace, with 26% having lost their job due to their gender identity.

In recognition of these adverse outcomes, SB 396 adds transgender and gender non-conforming individuals to the list of “individuals with employment barriers” recognized by the California Workforce Innovation and Opportunity Act (WIOA). The addition of transgender and gender non-conforming people to this list is not strictly symbolic – WIOA makes specialized programs and services available to adults with characteristics which substantially limit their ability to obtain employment.

The California Workforce Development Board, which works with the Governor to improve the state’s workforce investment system, will be required to add representatives of organizations that serve transgender and gender non-conforming people with the goal of improving the state’s ability to address the specific employment, training, and education needs experienced by this population.

Employers are currently required to post the Workplace Discrimination and Harassment posting, which describes prohibited behavior under the Fair Housing and Employment Act (FEHA). FEHA prohibits discrimination or harassment in employment or hiring on the basis of these protected traits: 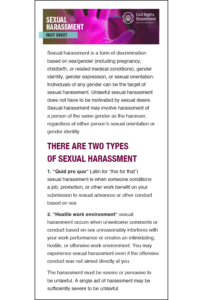 Existing law requires employers with 50 or more employees to provide supervisors working in California with at least 2 hours of training and education covering sexual harassment, discrimination, retaliation, and methods to prevent abusive conduct. “Sexual harassment” in this context includes not just conduct which is explicitly sexual in nature, but conduct which is related to an employee’s sex or gender, including pregnancy or related medical conditions as well as gender identity and sexual orientation.

Training must be given within 6 months of the employee taking a supervisory role, and repeated every 2 years. Effective January 1, 2018, covered employers are required to specifically address harassment based on gender identity, gender expression, and sexual orientation in their pre-existing training programs.

Although much of SB 396 is specifically focused on transgender employees, employers should note that the training requirement is broader, covering not only sexual orientation but also the full range of gender identity and gender expression. FEHA defines gender expression as “a person’s gender-related appearance and behavior,” which may or may not be stereotypically associated with their assigned sex at birth, while the Act’s regulations define gender identity as “each person’s internal understanding of their gender… which may include male, female, a combination of male and female, neither male nor female, a gender different from the person’s assigned sex at birth, or transgender.”

California also recently became the first state to recognize a third gender option on state-issued birth certificates, drivers’ licenses, and other forms of identification. Beginning in 2019, residents will have the legal option to identify as non-binary, which is an umbrella term for people who identify outside of the strict binary gender options of male or female. Non-binary individuals may identify as both male and female, or as neither male nor female.

Employers who are required to provide anti-harassment training programs for supervisory employees should examine their pre-existing programs to determine how best to integrate materials covering harassment on the basis of gender identity, gender expression, and sexual orientation.

We here at CPC will be monitoring all required California postings and notices in response to SB 396 and other recently-passed laws to ensure that the California All-On-One™ Labor Law Poster and other mandatory employer materials are compliant.  You can follow us on Facebook and Twitter, or subscribe directly to this blog, to keep up with employment law and posting requirements for California, as well as the rest of the United States.