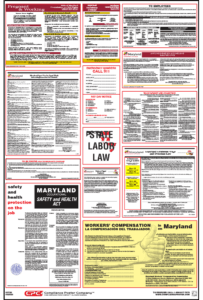 The Maryland Department of Labor, Licensing and Regulation has released a required update to the Maryland Minimum Wage and Overtime Law Notice following the enactment of legislation (HB 166) in March incrementally raising the state minimum wage rate to $15.00 per hour. To put this law in place, state lawmakers had to override Maryland Governor Larry Hogan’s initial veto of the bill. The bill became law on June 1, 2019, making Maryland the sixth state to establish a $15 minimum wage. California, New York, Massachusetts, Illinois, New Jersey and the District of Columbia have also adopted $15 minimum wage laws.

Currently, the Maryland minimum wage rate is $10.10 per hour. Under the new law, the minimum wage will increase incrementally, as follows:

Wage rates for the current and next two years are reflected on the updated Minimum Wage and Overtime Law Notice.

The new law makes two changes which go into effect this month: (1) amusement and recreational establishments must pay employees the state minimum wage rate, and (2) employers may pay 85% of the state minimum wage rate to employees under the age of 18. Previously, the age limit was 20. The law also requires the Commissioner of Labor and Industry adopt tip regulations requiring restaurant employers that use a tip credit to provide tipped employees with a written or electronic wage statement for each pay period showing the employee’s “effective hourly tip rate” as derived from employer-paid cash wages plus tips for each workweek of the pay period. The Minimum Wage and Overtime Law Notice on the Maryland All-On-One™ Labor Law Poster has been revised to integrate these changes.

The Minor Fact Sheet is included in our Maryland Mobile Poster Pak.™ Several occupations have been added to the list of occupations too hazardous for minors.  Specifically, occupations forbidden to all minors include:

Employment restricted for minors 14 and 15 years of age now includes occupations in connection with:

Ensure Your Workplace Posters are Current