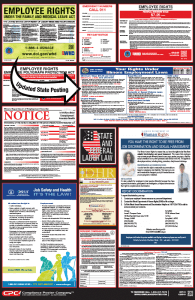 It has been 10 years since Illinois has implemented a minimum wage rate increase.  This year, Illinois’ low wage workers will start earning higher wages beginning with a $2 bump in their hourly wage rate to $9.25 per hour on January 1, 2020 and quickly followed by another 75₵ increase in July.  The boost in the minimum wage rate was propelled by the grassroots “Fight for Fifteen” campaign which led Illinois lawmakers to enact 2019 Senate Bill 1, raising the state’s minimum wage rate incrementally over the next seven years until it reaches $15.00 per hour in 2025.

Minimum Wage Rates Around the Nation

The law establishes a separate schedule for new employees who are under 18 years of age.

Employers covered by the provisions of any of the six major labor laws referenced on the Illinois Department of Labor’s Your Rights Under Illinois Employment Laws notice must post the revised notice.  Employers can comply with the posting requirement by purchasing the 2020 Illinois All-On-One Labor Law Poster™ or using the Your Rights Under Illinois Employment Laws Peel ‘N Post™ stickers to update existing Illinois All-On-One Posters.  Employers should also be prepared to update posters again before the next the minimum wage rate goes into effect on July 1, 2020.