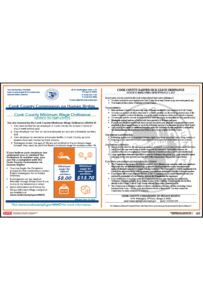 Earlier this week, new minimum wage rates took effect for employers operating in Chicago and Cook County, Illinois. Higher costs of living are often associated with these communities and raising the minimum wage rate gives workers buying power more on-par with workers in other major metropolitan areas of the country. Chicago has had its own minimum wage rate since 2015. This year, employees throughout Cook County are getting a raise.

Under either ordinance, employers who have paid sick leave policies which give employees paid time off in an amount and a manner consistent with such ordinance are not required to provide additional paid sick leave. Employers can place other conditions on the use of leave such as requiring advance notice, providing certification, and setting use minimums.