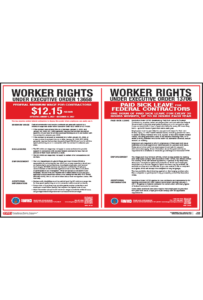 Starting January 1, 2019, the Executive Order 13658 minimum wage rate will increase to $10.60 per hour. Tipped employees also performing work on or in connection with covered contracts must be paid a minimum wage of $7.40 per hour. The following types of workers are covered by the Order:

The Workers Rights Under Executive Order 13658: Federal Minimum Wage Contractors Poster reflects the updated wage rates that will be effective January 1, 2019. The poster was also slightly rearranged and rewritten. Exemptions from the minimum wage listed under the “Additional Information” section have been moved to a new section titled “Exemptions.” Workers on contracts for seasonal recreational services or seasonal recreational equipment rental for the general public on federal lands are now listed under this new section. The poster also includes two new web links to provide employees with more information about the Executive Order and a list of United States Department of Labor’s Wage and Hour Division offices.

Federal contractors must notify all workers performing on or in connection with a covered contract of the applicable minimum wage rate under the executive order (29 CFR 10.29). Contractors must display the Workers Rights Under Executive Order 13658: Federal Minimum Wage Contractors Poster in a prominent and accessible place at the workplace. The poster can be ordered here, or by calling our Compliance Advisors at 1-888-495-9847.