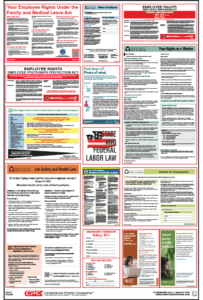 The Washington Employment Security Department (ESD) has just released two workplace notices that must be posted by all Washington employers – the new Washington Domestic Violence Resources notice and the revised Unemployment Benefits notice.  The notices are aimed at making sure that individuals are aware of the resources available to them in the event they experience job loss or domestic abuse.  Here’s what’s covered:

Washington State has become an influential model of progressivism in the workplace by adopting employment standards, policies and practices that raise awareness of social issues and improve the working conditions of workers.  This year, lawmakers tackled domestic violence by passing a law (House Bill 1533) which requires employers to post in the workplace information about domestic violence resources available to victims.   The new law is brief but direct.  In it, the legislature observed that:

The intention of the law is to “shine the light on” and help curb the problem of domestic violence by raising awareness in an environment uniquely conducive to the message – the workplace.

The Washington Unemployment Insurance Benefits (UI) notice has been reformatted and reflects expanded resources for unemployed workers.  Probably most useful is the increase in ESD telephone support from two to five days a week and the availability of the Handbook for Unemployed Workers, which may be downloaded from the ESD’s website.  The Handbook provides a detailed explanation of eligibility requirements, how to apply for benefits, reporting responsibilities, and benefit payments, most of which can be handled via the ESD’s eServices web portal.

Other changes to the UI notice include: