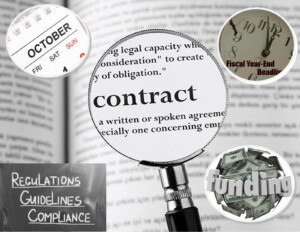 What types of contracts are covered by the EO?

The contractor minimum wage rate applies to all contracts for:

Who must be paid the EO minimum wage rate?

The EO generally applies to the following categories of workers performing “on” or “in connection with” covered Federal contracts:

Workers whose wages are governed by the DBA, the SCA, or the FLSA are only entitled to be paid the EO minimum wage for the time that they spend performing work on or in connection with covered contracts. Individuals employed in a bona fide executive, administrative, or professional capacity are exempt from coverage of the EO. Similarly, employees who are exempt from the minimum wage protections of the FLSA and workers who spend less that 20% of their workweek hours on covered contracts are not entitled to the EO minimum wage rate.

Contractors and subcontractors must notify all workers performing work on or in connection with a covered contract of the effective EO minimum wage rate. Contractors may comply by posting the official EO Minimum Wage posting in a prominent and accessible place at the worksite. Contractors who customarily post notices to workers electronically may post the minimum wage notice electronically in lieu of physical posting, provided that such electronic posting is displayed prominently on a website that is maintained by the contractor and is customarily used for notices to workers about terms and conditions of employment. Posting SCA and DBA wage determinations that reflect the effective EO minimum wage rate also comply with the notice requirements.

Is compliance with all Federal contractor notice requirements easy?

Yep. CPC has complied Federal contractor notices together for a one-step compliance solution. Later this year, we will be updating these posters with the 2018 EO Minimum Wage notice. In the meantime, preview our posters by clicking on one of the following links: