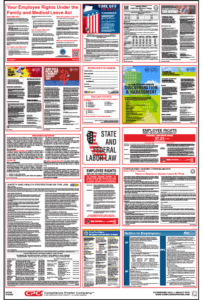 Over the last month, we have been highlighting some of the California labor laws  that were recently signed into law. Two of these laws require immediate posting of notices in the workplace. Each notice has been added to our 2018 California All-On-One™ Poster. The two workplace posting changes are:

Cal/OSHA Safety and Health Protection on the Job

The Cal/OSHA posting has been revised so that its terms are consistent with current and future Cal/OSHA penalty increases. The penalty section of the Cal/OSHA posting now refers to violation classifications rather than making reference to specific penalty amounts for each type of violation. This way, employers will not need to update the posting every time there is an increase in a penalty limit. The posting change was prompted by an amendment to Cal/OSHA’s penalty statute in September which increased penalty amounts immediately and which requires penalties to be adjusted annually by the rate of inflation starting next year.

Transgender Rights in the Workplace

California law protects and promotes diversity in the workplace. This includes protecting individuals who are transitioning or have transitioned from the sex they were assigned at birth or who are otherwise gender non-conforming. The protection of transgender employees falls within the California Fair Employment and Housing Act (FEHA) which prohibits employers from discriminating against an employee based on any of the protected categories, including gender, gender identity and gender expression.

Beginning January 1, 2018, the FEHA requires employers to post a notice of transgender employees’ rights prominently in the workplace. The newly developed poster explains “transgender” and transitioning terminology and describes some of the protections that apply to gender identity and gender expression. For example, employers are prohibited from asking an employee questions to detect an employee’s gender identity, employers may not enforce discriminatory dress code and grooming standards, and employers must have restroom policies that ensure an employee has access to facilities corresponding to the employee’s gender identity or expression. Beginning January 1, 2018, the FEHA also requires employers with 50 or more employees to include gender identity, gender expression and sexual orientation as a component of its mandatory sexual harassment training.