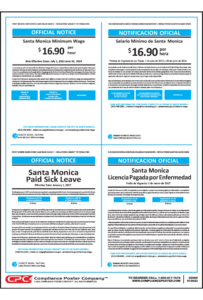 The law requires employers with employees who work at least two hours per week within Santa Monica to post the City’s minimum wage notices in English and Spanish, and in any other language spoken by five percent or more of the employer’s workforce. At the time of hire, employers must provide employees with the business name, address and telephone number in writing. Employers must maintain payroll records for at least three years.

Compliance Poster Company has created the Santa Monica Minimum Wage Poster and the Santa Monica Hotel Worker Minimum Wage, Paid Sick Leave & Service Charge Poster in bilingual formats that comply with posting requirements for most workplaces. If your workforce needs either poster in any other language, we can create that for you. Just give us a call.