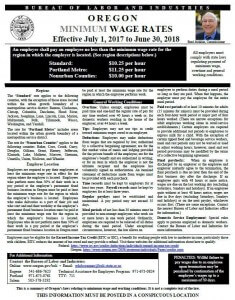 The 2017 minimum wage rates are as follows:

The 2017 Oregon Minimum Wage posting has been revised to reflect the current regional minimum wage rates and effective dates. In addition, new text has been added that notifies employees of possible eligibility for the Earned Income Tax Credit (EITC). The EITC is available to people with low to moderate incomes, particularly those with children. The credit may reduce taxes owed or provide a refund. The minimum wage notice provides the websites for Federal and Oregon EITC information.