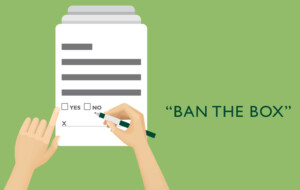 On June 14, 2019, an amendment of New Mexico’s “Ban the Box” law went into effect prohibiting private employers from using job applications that contain questions about an applicant’s criminal arrest or conviction history. This seemingly slight change to the application process is meaningful. Revealing a criminal history on an initial job application often results in an applicant’s elimination from consideration. Eliminating this disclosure from the job application gives the applicant the opportunity to be considered for employment based on his or her qualifications before the applicant’s criminal record is checked, making employment more likely. Increasing employment ex-offenders reduces recidivism, supports families and benefits society. Ban the Box initiatives play an important role. Ban the Box laws are already the norm for jobs in the public sector, but states are quickly adopting such laws for the private sector.

In comparison to other states’ Ban the Box laws, New Mexico employers have ample latitude in handling job seekers’ criminal histories. Some of what makes New Mexico’s Ban the Box law different:

Other states that have Box the Box laws applicable to private employers are: